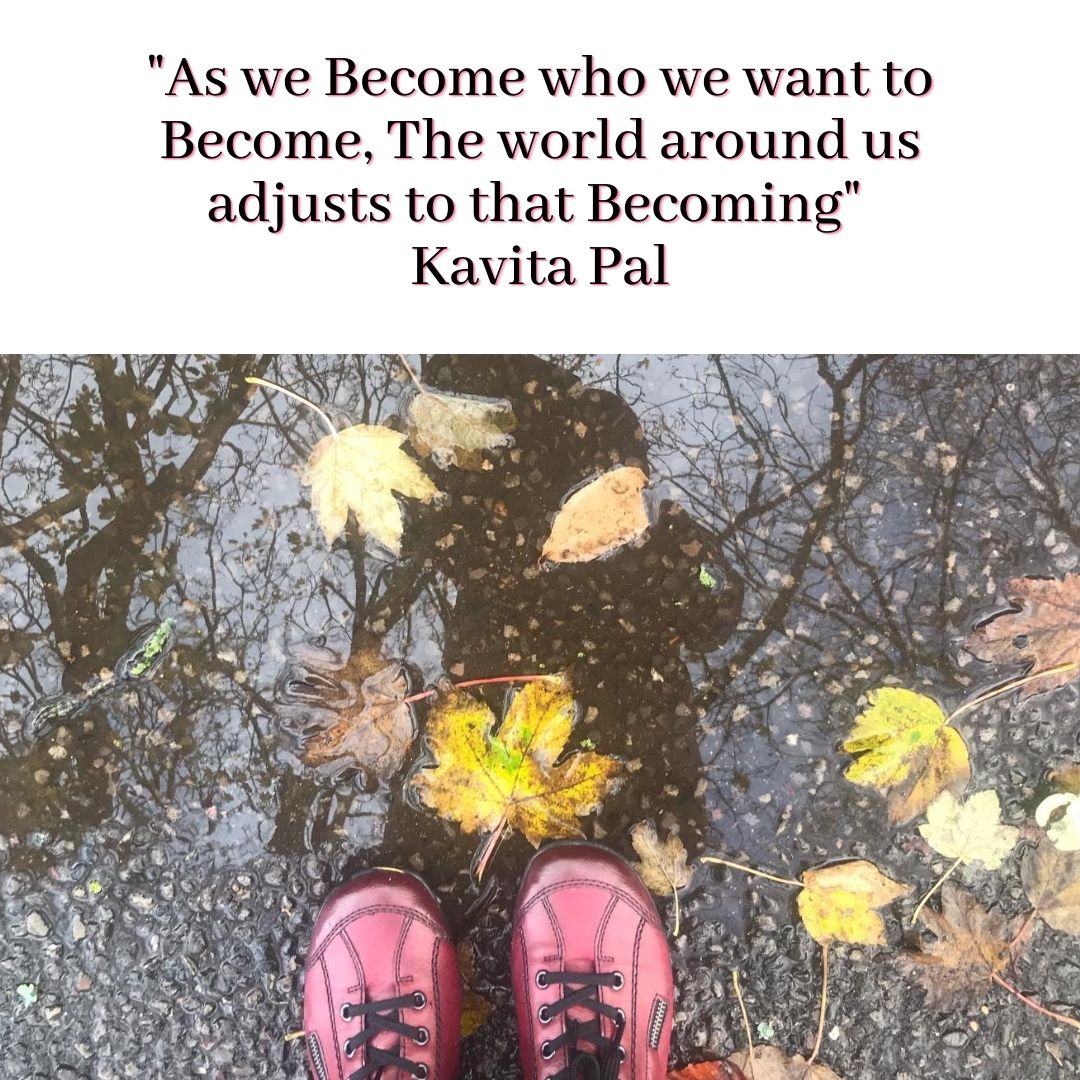 “As we Become who we want to Become, the world around us adjusts to that Becoming”- Kavita Pal

What even does the statement above mean?

As I began my conscious journey into Self-Realisation the first realisation I came to, hit me like a boulder.  I had never before been able to give these emotions a name.  As we all do, my mind would, very powerfully rationalise my emotions.  I would see people doing better than me, or having more than I had and the thoughts would go much like this, “oh some people have all the luck in the world.  It must be nice to have rich parents and be so pretty.  Well, they have very sporty parents so obviously they will run better than me.  They have third generation money being thrown at them so it is easy to wear designer clothes and drive posh cars…. Etc, etc, etc… you get the gist, right!”.  Each time these thoughts would leave me feeling uneasy, unhappy and rather mean.  It did not sit well with me that I was entertaining thoughts such as these.  Something was beginning to stir within me and I began very tentatively watching these thought.  It was sometime later, that I realised and acknowledged, that I was being plagued by the disturbing emotions of “jealousy and envy”! Aha, now, I had a name for the emotions that were causing so much havoc in my inner world. Something had to be done, this just did not feel right.

By this time, I was already involved into my daily yoga and meditation practise. I decided I would finish my meditation with daily affirmations of what I would like to become.  I would sit with my eyes closed and will myself, into telling myself, who I would like to be.  My affirmations went a little like this, “I am patient, I am calm, I am generous, I accept people and things for what they are, I am enough”, and so on and so forth.  Sometime, into doing this daily practise, I had another realisation!  Doing the affirmations was not sufficient, I want to “Become” patient, calm, generous, accepting and enough!  I did not want to just will, it or think it, I wanted to “Become”, to feel it in every fibre of my body.  I wanted every cell of my body to “Become” all those affirmations.  But, how?  “Understanding”, that is how.

Understanding who I am, where I have come from, and where I am going. It is questions such as these that we explore within the relams of the Akashic Records. This is a very powerful journey, one that is well worth taking.  Of course, “the known is a drop, the unknown is an ocean”, even so, like Lao Zhu said, “The journey of a thousand miles, begins with one single step”.  I noticed, that as I began to slowly become more patient, calm, generous and accepting, the disturbing emotions of jealousy & envy began to lessen their grip on me.  As that happened, situations and people around me began to subtly adjust to the changing me.  I did not have to ask people to change, I just had to change myself and others changed organically.  It is thanks to this journey, that I have embarked which has led me to believe that, “as we Become who we want to Become, the world around us adjusts to that Becoming.”  I still have a long way to go, but I also have all the time in the world to keep taking one step after another and it my work within the Akashic Record Readings which is helping me as I help those who seek me out.